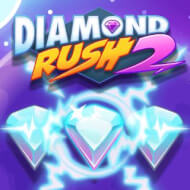 Match gems the fastest in Diamond Rush 2. Play by racing against time to explore five planets. So spot the best combinations and eliminate them.

"Diamond Rush 2" How to Play

Combine three jewels that are at least the same to discover new planets. Quickly fill the section indicators before the time runs out. Move to new planets by playing three levels on each planet.