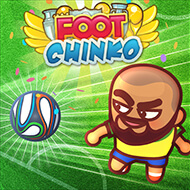 Play Foot Chinko game and win African Cup, Olympic Games, European Championship first on your way to World Championship. Hit the ball in time and pass it to your teammates. Adding fun to the game, there are moving and stationary areas where you can direct the ball by hitting it, gain speed, electroshock areas where you can lose the ball, and buy boosters with the points you collect.

"Foot Chinko" How to Play

Play Foot Chinko and become a champion in this fun style of football.

As you progress through the championship, the matches will become more difficult. For this reason, you should make good use of the moving and inactive areas on the playing field and avoid moves that will bring the ball out of the goal.

Make sure your player who moves to pass passes at the right time. When you come to the front of the goal, you should follow the movements of the goalkeeper and your player well.

As you win the matches, you will collect points and you will be able to buy pre-match power-ups with these points.